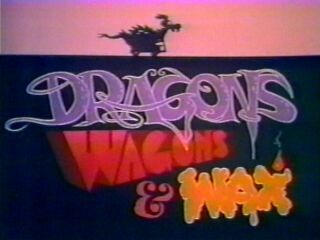 Dragons, Wagons & Wax was an Edutainment Show produced by WCET in Cincinnati, Ohio. It was a cooperative production from the Ohio Department of Education, and the International Instructional Television Cooperative. It was shown in schools in Ohio during the late 1970's and early 1980's, and occasionally elsewhere on PBS stations.

The show featured Tom Long and Linda Sizemore talking about various educational topics, with a focus on science. The topics usually had Tom and Linda in a two-room set, and sometimes an animation would help illustrate the point. 32 episodes were filmed.

What most children remember though was the Action-Hogging Opening, which was usually the only thing the program had to do with "dragons", "wagons" and "wax".

Episode one is available to watch on YouTube, here