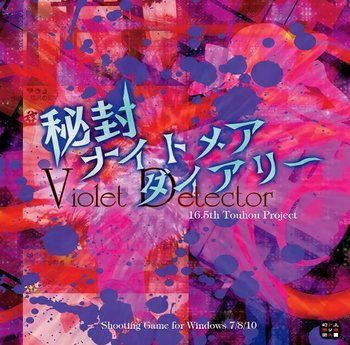 Hifuunote Secret Sealing Nightmare Diary ~ Violet Detector is a video game created by Team Shanghai Alice for Windows computers in 2018. It's the 16.5th videogame installment in the Touhou Project franchise, a direct follow-up to Sumireko's scenario in Touhou Hyouibana ~ Antinomy of Common Flowers.

Sumireko Usami finds herself trapped in a nightmare in which characters from previous games attack her with danmaku. She must survive three weeks and take pictures of the bullet patterns on her smartphone.

The game continues the "Danmaku photography game" format started by Touhou Bunkachou ~ Shoot the Bullet, but adds a teleportation mechanic reminiscent of Impossible Spell Card. The presentation is also more modern, with Sumireko taking pictures on her smartphone and adding tons of hashtags. There are new bosses from games 15-16 as well as final and EX bosses from other games.