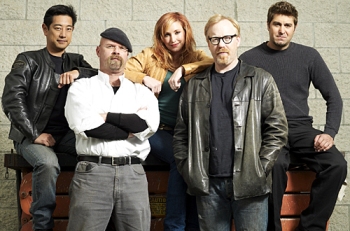 Left to right: Grant, Jamie, Kari, Adam and Tory.
They're what you call "experts".
"Remember, children, MythBusters has hired a licensed pyrotechnician to help us blow stuff up. You should never try anything like this unless you have your own television show."
— Adam Savage, "Lightning Strikes / Tongue Piercings"
Advertisement:

Gonzo pop culture meets off-beat science as Adam Savage and Jamie Hyneman — two special effects guys with over thirty years of experience between them — take on urban legends, ancient myths and tall tales of all kinds to debunk (or confirm!) them. The show ran from 2003 to 2016.

Adam and Jamie originally gained minor celebrity when their robot Blendo was a competitor on Robot Wars then later BattleBots (and was so badass that it was forced to withdraw from the Robot Wars competition in exchange for co-championship because it was knocking chunks out of the competitors and sending them over the safety walls protecting the audience), and Grant was also a known competitor with his famed middleweight robot Deadblow.

With the help of their crack team of smart-ass builders (artist/sculptor Kari Byron, model builder/carpenter Tory Belleci, robotics engineer Grant Imahara, and formerly welder/metal worker Scottie Chapman and temporary replacement/metal worker Jessi Combs) from Seasons 2-9, as well as crack crash-test dummy Buster, Adam and Jamie meticulously take apart popular myths ranging from the legend of Archimedes' solar "Death Ray" to "free energy" to the most common Hollywood exaggerations such as exploding cars and the knockback from a bullet.

They render each myth down to its component elements, then apply a goofball scientific rigor to reproducing those elements. Jamie owns and continues to run the special effects studio M-5 Industries, where he has all the equipment you would possibly need to build any sort of contraption they need to. And whenever they come across something that is beyond their expertise, they call in favors from colleges and other specialists. Their reputation has gotten to the point that they can get to just about any place because they provide excellent PR (to the point that sitting US President Barack Obama appeared on a 2010 episode) — a contrast to the first episode when Jamie found trouble trying to obtain a military grade JATO rocket; they ended up commissioning a custom one (or the third episode, where Sears wouldn't let them film in the store when they were trying to track down a specific model of lawn chair).

When a legend fails to pan out, as it often does, they usually escalate matters to the point where the legend's expected results do occur. This process is affectionately called "replicate the myth, then duplicate the results" — usually at a point so far beyond the normal parameters that it isn't even remotely plausible that it happened by accident (or at the very least, so incredibly dangerous that anyone capable of sound judgment wouldn't attempt it in the first place). Usually these escalations involve entertaining explosions (such as a popular one in a March 2005 episode which vaporized a cement truck, or, even better, an April 2009 episode where they annihilated a car with a rocket-sled).

Not every myth is busted, though — they are happy (although frequently surprised) when they prove that a story, however wild, is at the very least plausible. In "Big Rig Myths", they managed to confirm all three myths, and in their first episode devoted to viral videos, the myths that made it to air went four-for-four in confirmation. And so far, nearly every myth has some kernel of truth, even if that truth doesn't directly relate to whether the myth is plausible.

The show has a geek-chic atmosphere that is almost irresistible. Part of the attraction is the Odd Couple pairing of Class Clown Adam and stolid Jamie, with their frequent jibes and competitions, and the kind of "intellectual The Three Stooges" vibe that the build team emits. Also, it's the humor and wacky sense of fun with which they all go about their mission. They once built not one, not two, but three different machines designed to drop buttered toast on the floor. For Christmas 2006 they built a Rube Goldberg Device to celebrate the holiday. The fact that Scottie, Kari and Jessi are three of the most attractive, genuinely intelligent women on TV doesn't hurt with the male (or gay) viewership, either. Grant and Tory also have their fans. (This series is a shining example of Geeky Is Sexy.) Grant has a growing fanbase in the Steampunk community, having even appeared in an webisode of The Adventures of The League of S.T.E.A.M. and building a robotic ringbearer for the steampunk wedding of two of their members.

They don't have official education in scientific experimentation, but are just skilled in engineering, model making, construction and special effects (prior to the show starting, Jamie's M5 Industries was a sought-after model-making company, and Adam, Grant and Tory worked for ILM). Because of that they carry across an image of being One of Us; their reactions are much like regular people. Here are some examples of the dialogue.

The show received seven Emmy nominations (2009-2015, no wins), and was easily one of the most popular programs on the Discovery Channel. In 2010, the show aired redux versions of certain older episodes as "Buster's Cuts", featuring on-screen pop-ups containing behind-the-scenes notes, bits of humor and trivia, and points about the myth being tested that didn't make it on the episode. Additionally, content from older episodes was recut to be used in the more kid-friendly Head Rush aired on Discovery Kids Channel.

In 2014 Kari, Grant and Tory were released from the show due to growing production costsnote each new contract negotiation tends to raise the salaries for the people involved, not lower them, so even a hugely popular show like MythBusters would have gradually diminishing returns, and after another season of hosting the show alone Adam and Jaime announced the end of MythBusters, with the series finale airing on March 5, 2016. During the course of the show Adam and Jamie went on the road for a series of Behind the Myths tours (a/k/a MythBusters Live), but, with the end of the show, they have ended the tours also, with them amicably going their separate ways.

Soon after, sister network Science announced plans to revive the show with a new cast, beginning with MythBusters: The Search — a reality competition to determine the new cast, followed by the proper revival series later in the year. The first season of the revival premiered on November 15th, 2017. In the meantime, Netflix commissioned Beyond International Group, the company behind MythBusters, to rope Kari, Tory and Grant into a Spiritual Successor of the show called White Rabbit Project, which also focuses on legends and theories, but instead of busting them, the show seeks to validate and rank them. White Rabbit Project premiered with 10 episodes on December 9th, 2016, on Netflix. Additionally, Adam, along with several other close friends, started a Web Video and podcast series called Tested, along with working with Michael Stevens of V Sauce on a series called Brain Candy. Originally they roped in Jamie for the show Tested as well, but he then bowed out as he wished to retire from the public eye and work in privacy.

On August 27, 2019, at the age of 39, Jessi was killed in a crash of a rocket-powered car while trying to break the women's land speed record for four-wheeled vehicles. She was posthumously awarded the honor by the Guinness Book of Records; it still stands to this day.

On July 13, 2020, at the age of 49, Grant died as the result of a ruptured aneurysm in his brain. In his honor, Discovery Channel aired an all-day MythBusters marathon on July 17.

Troping in three! Two! One!: