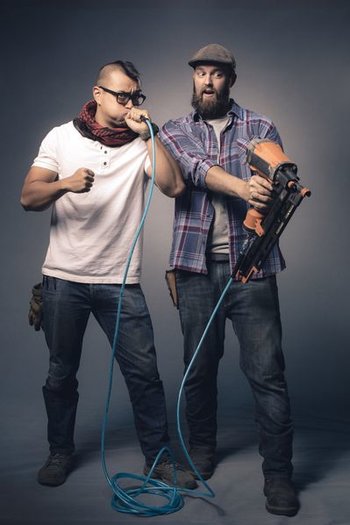 After the original series ended, MythBusters: the Search, a reality competition, was launched. 15 hopefuls were put through a series of build tests to demonstrate their skills, with the two finalists getting the chance to become MythBusters in their own right. The winners of this series were Brian Louden, a biologist and paramedic, and Jon Lung, a product and graphic designer, who now get to continue the tradition of scientifically testing myths, urban legends, and tropes.

This show is largely the same as the better-remembered format of the original, with Brian and Jon introducing a myth at the beginning of each segment and examining if it is plausible under real-world conditions before going onto trying to recreate the myth on a larger scale to try and get as dramatic a result as possible. Throughout their experiments and adventures, Brian and Jon are accompanied by Bo the MythDog and have their every step narrated by a returning Robert Lee.

As of yet, this incarnation of the show has only aired one season in Winter 2017-2018, and two of those episodes remain unaired in the US. The next year instead launched a different spinoff, Myth Busters Jr, with Adam returning from the original series to host.