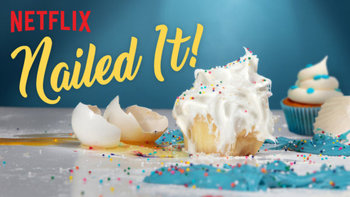 Nailed It! is a reality TV competition by Netflix hosted by comedian Nicole Byer and judged by pastry chef and chocolatier Jacques Torres.

In the show, amateur bakers have to replicate grandiose and complex works of baking done by professionals despite sucking at it. The competition is divided in two challenges: "Baker's Choice", in which each contestant must recreate a different dessert of some sort with a theme and "Nail It or Fail It", which has the contestants trying to recreate a grandiose cake full of details. A grand prize of $10,000 and a trophy are awarded each episode to the baker that comes the closest to recreating the cakes.

Several spinoffs have come out, and are available on US Netflix with subtitles: