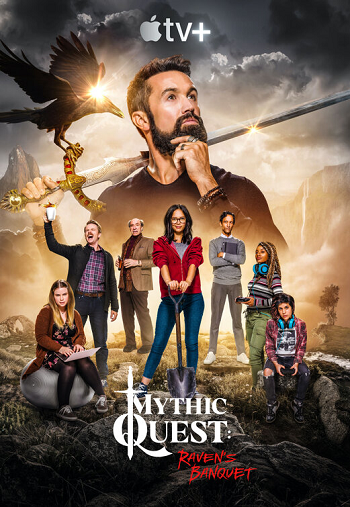 Mythic Questnote Subtitled Raven's Banquet during season 1 is a comedy web television series that premiered in 2020 on Apple TV+. It was created by the team behind It's Always Sunny in Philadelphia, and is co-produced by video game studio Ubisoft, who also created the game content shown in the series.
Advertisement:

The show follows the behind-the-scenes exploits of the game studio behind Mythic Quest, the world's most popular Massively Multiplayer Online Role-Playing Game. The creative and business sides of the studio are in constant conflict as Ian Grimm (Rob McElhenney), the creator and creative director, is distracted with whether or not their work is establishing a worthy legacy for himself. Lead programmer Poppy Li (Charlotte Nicdao) prioritizes making the game an enjoyable work of art, lead writer C.W. Longbotton (F. Murray Abraham) pretends he's got a handle on the game's story, while head of monetization Brad Bakshi (Danny Pudi) just wants to keep the money flowing. In the midst of it all, affable but exploitable EP David Brittlesbee (David Hornsby) tries to assert his authority, including over his slightly psychotic new assistant Jo (Jessie Ennis), while recently-recruited testers Dana (Imani Hakim) and Rachel (Ashly Burch) try to keep their heads above water.

As all this is going on, the team struggles to remain in the good graces of their player base, terrified at the very real possibility that millions of people will turn away and result in the studio's closure.

Three seasons have been released, and the show is confirmed for a fourth. A spin-off series, Mere Mortals, was announced

during the third season.

The first video is an excerpt of an interview by the AVClub showing Danny Pudi as a cast member on 'DuckTales (2017)'. The second video is from 'Mythic Quest' (2020), where Pudi's character discusses the DuckTales franchise.

The first video is an excerpt of an interview by the AVClub showing Danny Pudi as a cast member on 'DuckTales (2017)'. The second video is from 'Mythic Quest' (2020), where Pudi's character discusses the DuckTales franchise.