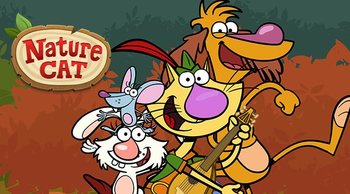 "Onward and yonward!"note From left to right: Daisy (below), Squeeks (above), Nature Cat, and Hal
Advertisement:

Nature Cat is an American animated kids' Edutainment Show that runs on PBS Kids as of November 25, 2015. The show is a co-production of Spiffy Pictures (the production company of Sesame Street performer David Rudman), 9 Story Media Group, and WTTW Chicago, the latter of which serves as the show's presenting station. It follows the escapades of Fred the house cat, who, when his family leaves for the day, becomes an adventurer named Nature Cat who is always ready to explore the natural world around him. That is, if he knew the first thing about exploring nature, which winds up getting him into all sorts of situations. Accompanying him are a multitude of other animal friends, including the energetic but dimwitted Hal the dog, the sassy though kind Squeeks the mouse, and the knowledgeable rabbit Daisy. Each episode focuses on a single aspect of life or earth science, with a running plot to go alongside it.

The show is notable for its All-Star Cast and abundant pop-culture references. In 2016, the show was one of PBS' top shows, as it had reached 10.3 million kids ages two to 11 on television, and the brand averaged 13.5 million streams per month across all PBS KIDS digital platforms. It was renewed for a second and third season, with the second premiering in 2018 and the third in 2019. Later on, fourth and fifth seasons launched production

◊ for a 2022 release. The show creators are simultaneously working on Donkey Hodie.

Now with a Character Sheet which could use some love.