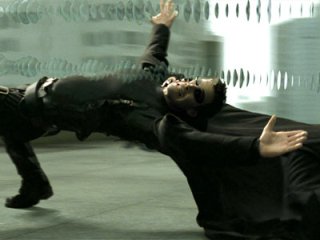 "Dodge this."
"If you insist."
"You know what I'm talking about. In all the cool action movies, and I'm talking about the coolest of the cool, it always seems like time slows down in the middle of the action. You know, you can see the bullets flying through the air, the hero dodging in slow-motion. Oh man, it would be so cool to be able to do that. Bullet-time, that's what they call it."
— Killer Suit, Max Payne
Advertisement:

Bullet Time (sometimes referred to as time-slice photography) is a visual effect used to slow down time during an action scene, allowing high speed movements such as the flight path of individual bullets to be seen by the audience. The projectiles may also leave visible streaks and trails as they fly through the air.

It is a convenient way to depict Super Reflexes, by allowing the audience to experience the same powers of enhanced perception that the character is using to react to danger. The difference between this and a regular Slow Motion shot is that, in bullet time, the camera moves (often a significant portion of a full circle) around the subject rather than a static or simple tracking shot. It is often used to stop action at a dramatic point so that the audience can see a panoramic or surround view around the event being emphasized.

In film, television and advertising, the effect is achieved by a set of still cameras surrounding the subject which are activated in rapid succession. The pictures in the still cameras are then displayed consecutively and spliced into movie frames, creating the effect of a single camera moving around a scene either frozen in time or moving incredibly slowly.

The first example of Bullet Time can be found in the obscure 1981 action film Kill and Kill Again. It was also later used in a commercial by The Gap and popularized by the film The Matrix to the point where most contemporary uses of it are parodies of, homages to, or ripoffs of The Matrix. Bullet Time was also used in computer games such as Max Payne and Enter the Matrix, where it allows the player to slow the game world down but still look and aim at normal speed.

Antecedents to Bullet Time occurred before the invention of cinema itself. Eadweard Muybridge used still cameras placed along a racetrack to take pictures of a galloping horse. Each camera was actuated by a taut string stretched across the track; as the horse galloped past, the camera shutters snapped, taking one frame at a time (the original intent was to settle a bet the governor of California had made, as to whether or not all four of the animal's legs would leave the ground). Muybridge later assembled the pictures into a rudimentary animation, by placing them on a glass disk which he spun in front of a light source. His zoopraxiscope was the direct inspiration for Thomas Edison's moving pictures. In effect, Muybridge had achieved the aesthetic opposite to The Matrix's Bullet Time sequences; it may be a historical accident that no 19th century bullet-time animations were made.

An identical phrase, "Bullet Time", is a registered trademark of none other than Warner Bros., the distributor of The Matrix. It was formerly a trademark of 3D Realms, producer of the Max Payne games. It should be noted that the "Bullet Time" trademark refers specifically to the technique of using multiple cameras and a green screen to "freeze" the action and rotate around it, rather than just slowing conventional action down.

Note that while Bullet Time is often used to depict Super Reflexes, the two are not the same — the former is a visual depiction for the latter, not a synonym. Depiction of Bullet Time contained in imitative works should only be considered authentic if the effect is shown as being an element of the given environment's physics (i.e., the environment does actually slow down, at least for the individual experiencing it, with other distortions of physics, such as a limited absence/control of gravity as a consequence) rather than being purely visual/aesthetic in nature. As a result, this should not be considered the same thing as conventional slow motion.

The Trope Codifier. An Agent shoots Neo, only for him to dodge most of the gunfire.

The Trope Codifier. An Agent shoots Neo, only for him to dodge most of the gunfire.