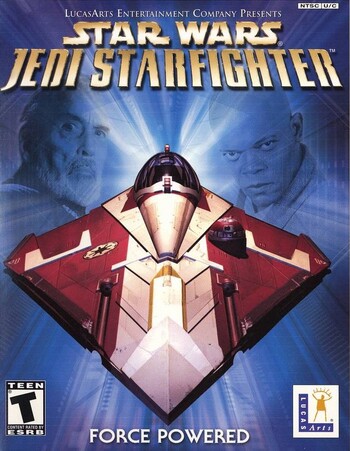 A 2002 Star Wars Legends game featuring starfighter combat, it is a direct sequel to Star Wars Starfighter, taking place ten years later, immediately prior to Attack of the Clones.
Advertisement:

Shortly before the Clone Wars, Adi Gallia is educated by her master Saesee Tinn in the use of the new Delta-7 Aethersprite-class starfighter, which was to become the standard starfighter used by the Jedi Order, replacing the old Delta-6 models. Once finished, she is tasked with attempting to recruit a pirate named Nym to aid the Jedi Order on a secret mission. Gallia meets with Nym's representative Reti, but as they talk, the Trade Federation interrupts and attacks them. Though they prevail, they fail to notice that their battle was observed by a spy ship and Jango Fett.

After Reti takes her to meet Nym (who is rather miffed that he met Adi without his permission), Adi helps win Nym over to his side by helping him break his Mere Resistance comerades out of a Trade Federation prison and helping to destroy a Trade Federation sensor station that has been monitoring his movements. Now allied, Nym and Jenkins move to disrupt the Federation's operations in any way they can, but Adi and Reti discover that the Federation have been employing a new biological weapon: trihexalon.

Cavik Toth, the leader of Sabaoth Squadron, had been tasked with developing a biological weapon for use in the upcoming war by Count Dooku, and tested its use on a number of civilian cities. The drug, nicknamed "Dragon's Breath" and shortened to "hex", was capable of disintegrating humanoids in mere seconds. Adi and Nym move to destroy all Trade Federation facilities involved in the production and use of trihexalon, and once all is said and done, they finally part ways, with Nym and his loyal men going to retake their base on Lok, and Adi moving to aid the Jedi Order as they move to rescue Obi-Wan Kenobi, Anakin Skywalker, and Padme Amidala on Geonosis.

Nym and his men successfully retake his base, but Reti is chased off by Jango Fett, who had arrived to collect the bounty on his head, and they discover that Sabaoth Squadron had launched an assault on Geonosis themselves, intending to counter any attempt by the Republic to stop the CIS from executing their three prisoners. Adi rendezvouses with a legion of the newly-created Grand Army of the Republic and aids in an assault on the CIS facilities on Geonosis, before moving to space to counter Sabaoth Squadron's attack. With the aid of everyone Nym could send her way, Adi, Saesee Tinn, Siri Tachi, Jenkins, Nym, and the remaining Mere Resistance men are able to destroy Sabaoth Squadron once and for all, preventing the destruction of the Clone Army and destroying the last vestiges of Hex weapons completely.

After all is said and done, Adi and Nym permanently part ways, with Adi being called to assist the Republic in the upcoming war, and Nym linking up with old friend Vana Sage to go and find Reti.