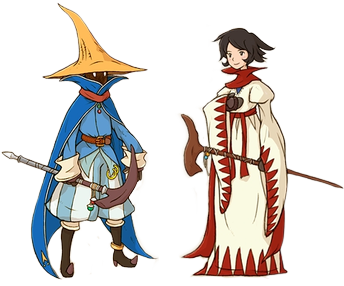 To harm or to heal? Take your pick. note But who says you can't do both?
Advertisement:

Okay, you're designing an RPG, and you've got your Fighter, Mage, Thief, but something's missing. The magic adds a lot of strategic elements to the combat system, and you don't want to have just one magic user. You want to add more variety. But you can't just create a copy of the mage; it has to be different somehow. So how to make the two mages distinct? Simple. Have one attack and the other heal!

Black and White Magic is a common way of having more than one magician character or class while having them remain distinct. One of the mages specializes in offensive magic which causes damage, negative status, or otherwise harms the enemy, while the other specializes in defensive magic to cure their allies, remove negative status, or increase their own stats. They are often referred to as "wizard" and "cleric" (or some variation) respectively.