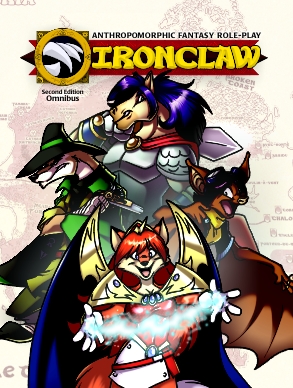 Our heroes!
Ironclaw is a Tabletop RPG of Anthropomorphic Fantasy published by Sanguine Games. Its first edition came out on 1999, with its second edition released in 2010. The setting is a Low Fantasy setting with the themes of a Medieval European Fantasy experiencing the rise of the flintlock, the musket and the merchant classes as powerful influences. The big difference is that all the races that live in this game are anthropomorphic animals.
Advertisement:

Ironclaw takes place in the continent of Calabria, the majority of the lands controlled by the Great Noble Houses:

Apart from the Great Noble Houses and their vassals, two other forces lay claim to territories in Calabria:

The players take the role of adventurers plucked from the new middle class. They have esoteric skills and abilities above the common unskilled laborers, and have access to expensive equipment. Meanwhile, the nobles of Great Houses fight their petty wars for more power, and are not above using those below them as pawns in their game. The world is waking up to an Age of Reason where technology is slowly catching up to magic and the old ways of government are being questioned.

In addition to the main book, Sanguine Productions also published a number of supplements for first-edition Ironclaw, detailing the major political players of Calabria. For second edition, they have released four supplements so far - the Book of Mysteries, the Book of Fools, the Book of Jade and the Book of Adventures, all of which have updated versions of materials from 1e supplements. Additionally, Chris Goodwin, who did all of the illustrations for the second edition's species chapter, has released a book titled Ironclaw: A Bestiary

, which contains those illustrations as well as the full versions of the descriptions he wrote for them.

Sanguine Productions also made an Oriental-themed anthropomorphic RPG called Jadeclaw; the first edition was separate from Ironclaw but the second takes the form of a supplement called Book of Jade. A Middle Eastern/African-themed supplement, Book of Horn and Ivory, came out in September 2017. The Book of Monsters premiered at Anthrocon 2019 introduces a variety of monsters and environmental hazards for players to encounter.