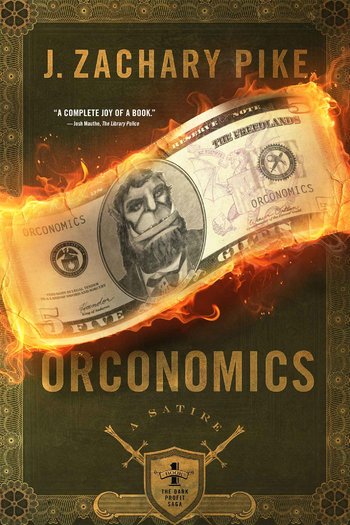 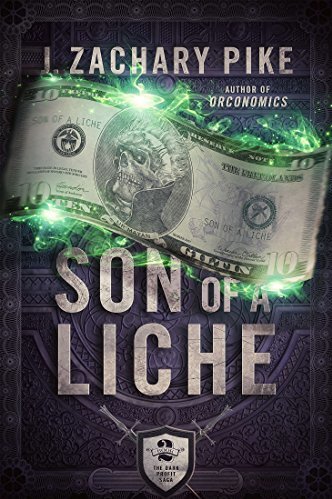 Son of a Liche cover
The Dark Profit Saga is a series of satirical fantasy novels by J. Zachary Pike, currently consisting of Orconomics: A Satire (2014) and Son of a Liche (2018). In preparation for the release of Son of a Liche, the author has also sent the short story "The Monster Below", which is also a part of this setting, to everyone pre-ordering the second novel.
Advertisement:

The novels' setting is the fantasy world of Arth, which is described as "a world much like our own but with more magic and fewer vowels." It's a mostly standard fantasy setting with a modern understanding of economics. A sizable chunk (as in 40%) of the economy of the Freedlands is based on the activities of the Heroes' Guild, who send out adventurers on quests and bring back loot from slain foes (or rather, F.O.E.'s, which stands for "Forces of Evil"). The loot is then assessed and split up between the interested parties (i.e. investors). Additionally, shares of the loot are bundled with shares of other loots and repackaged as new commodities to be sold on the market. There's also a bustling service industry catering to adventurers, including gear suppliers, innkeepers, healers, enchanters, potion merchants, etc. There is, of course, a large dose of risk, both personal (for adventurers) and financial (for investors). After all, no one knows for sure the value of loot a particular F.O.E. might possess. And, of course, a good percentage of adventurers don't survive their first year on the job, and many veterans burn out or become salve-heads (people addicted to healing salves, and who deliberately injure themselves just to get more). The various races of Arth are typically divided into the races of Man (the standard "good" races: humans, Dwarves, Elves, and Gnomes), the Shadowkin (the "cursed" races: Orcs, Goblins, Nagas, Trolls, etc.), and a myriad of monster races (e.g. Ogres, Lizardmen).

Gorm Ingerson is a Dwarf and a former adventurer, spending his days passed out drunk in one ditch or another. Then he saves the life of a Goblin he names Gleebek and gets "strongly encouraged" to join a holy quest by the followers of the goddess Al'Matra along with a group of misfits in order to wipe his slate clean. The alternative is to have the Heroes' Guild hang him for desertion (Guild rules say that all of their adventurers succeed or die trying; the rule is strictly enforced, even if they have to ensure the "die trying" portion by hanging any deserters) with Gleebek's status as an NPC (Noncombatant Paper Carrier) revoked through guilt by association. So, Gorm (along with Gleebek as his squire) has to become one of the Seven Heroes, along with an Al'Matran scribe who thinks he's the Seventh Hero, a thief-turned-bard/skirt-chaser, a pair of wizards who constantly bicker and engage in destructive duels, an Elective Mute former adventurer with PTSD, and a has-been Elf ranger who, like Gorm, likes to spend her days passed-out drunk.

The first book, Orconomics, was published in 2014. A sequel, Son of Liche, was published in 2018 and features Gorm and his band of disgraced heroes trying to win back the trust of the orcs they betrayed while trying to sell an effective counter-pitch against a liche's attempts to sell a city-state on the benefits of becoming an undead thrall. The author is currently working on the third and final novel titled Dragonfired.

As part of a promotion for Son of a Liche, the author has offered a free short story titled "The Monster Below" (as well as other goodies, such as a detailed map of Andarun), set in the same world, to anyone pre-ordering the book.

There is also A Song of Three Spirits, which is the Arth version of A Christmas Carol with Fenrir Goldson playing the part of Scrooge.

features a section on the world of Arth, written by the people he cooperated with on Worldbuilding the setting, which includes blog entries describing some of the races, clans, and organizations. There are also some pictures of the protagonist, Corrupt Corporate Executives, and others.