Literature / The Dark Side of the Sun 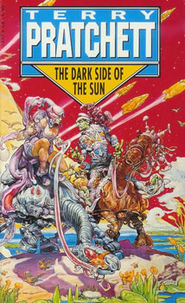 You who stand before us
We have held the stars in the hollow
Of our hands, and the stars
Burn. Pray be careful now
As to how you handle them.
We have gone to wait on our new world
There is but one
It lies at the dark side of the sun.
Advertisement:

One of Terry Pratchett's earliest novels, The Dark Side of the Sun explores a science fiction setting, although astute readers will note the appearance of several concepts later to appear in Discworld.

Dom Sabalos is the heir to the throne of the planet Widdershins, a human colony in a galaxy where there are fifty-two intelligent races — but oddly all of them inside a sphere 200 light-years in diameter, centred on Wolf 429. Besides this, there are also bizarre stellar phenomena and mysterious towers strewn across the region that speak of Precursors, known as the Jokers. The mystery underlying the setting is where the Jokers went, the only clue being the poem shown above, which was found on one of the towers.

A secret arm of the human government, using 'probability math' to predict the future, tries repeatedly to assassinate Dom but the universe always conspires to save him for some purpose: which, of course, is to find the truth behind the Jokers' disappearance...