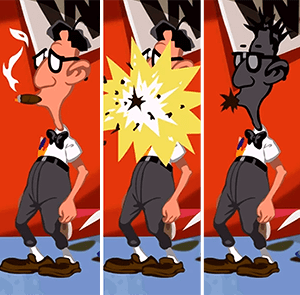 "We three kings of Orient are
Trying to smoke a rubber cigar.
It was loaded, it exploded —
Now we're on yonder star-ar."
Advertisement:

A character gets a "cigar", puts it into his mouth, lights it, EXPLOSION! Another victim of the explosive cigar! This sort of thing commonly occurs in cartoons.

In a comedic work, after the smoke clears, the sap will have a smoke-blackened face, their eyes will be bugging out in alarm and the cigar will now be a stub with a star-shape of peeled-back cigar paper at the end. In more serious works, the results will typically end up being fatal.

A common variation of this joke is similar to the Poisoned Chalice Switcheroo: the victim suspects the cigar is "loaded" and insists on swapping cigars with the instigator; unfortunately, the instigator is too clever and had the "loaded" one in the first place, meaning the victim still ends up falling for it.