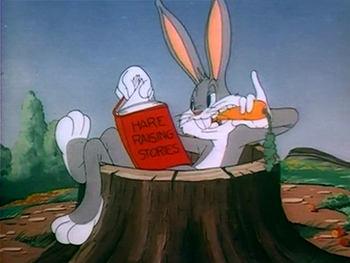 "The Unruly Hare" is a 1945 Merrie Melodies cartoon, directed by Frank Tashlin and starring Bugs Bunny and Elmer Fudd.

Elmer is a surveyor for the railroad, which is laying down tracks through Bugs' burrow. As Elmer sets up his equipment, Bugs decides to have some fun with him. As usual, Hilarity Ensues.

"The Unruly Hare" provides examples of: