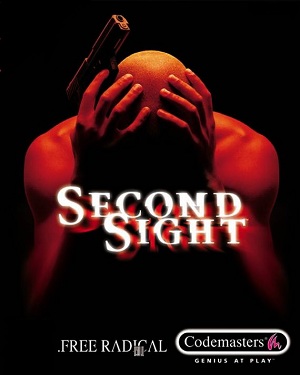 Second Sight is a 2004 third person Action-Adventure game developed by Free Radical Design of TimeSplitters fame and published by Codemasters for PC, Xbox, PlayStation 2 and GameCube. In this game, you take on the role of John Vattic, an amnesiac scientist who wakes up in a medical facility only to discover he has psychic powers.

The game is a Third-Person Shooter with stealth gameplay and Psychic Powers thrown into the mix, with stealth being the preferred method of solving missions, especially in the early chapters. John unlocks his powers slowly, and even though they are progressively strengthened he is rarely ever a match for more than two well armed opponents. That said, once he gets his full complement of powers at full strength— Telekinesis, healing, projection, possession, energy blasts and invisibility— let's just say that the Videogame Cruelty Potential and Difficulty Level both rise accordingly.

The story itself is top notch, and has a creative Twist Ending, worth playing through for that alone. The main character awakens in a research facility with no memory and powerful psychic abilities. He has a flashback to his past, learning he is John Vattic, professional skeptic and psychic debunker. He was recruited on a mission to find out if the legendary Soviet parapsychologist Dr. Grienko is alive, and just what he's been up to. Something on that mission went horribly wrong, leading John to where he is now. Throughout the game John progressively unlocks his missing memories, and in doing so learns more about his present. It seems a sinister Government Conspiracy is after Grienko's research to reliably create and empower psychics, and means to kill and discredit those who would oppose them.

Not to be confused with Psi-Ops: The Mindgate Conspiracy, another game with a similar premise that came out in the same period.