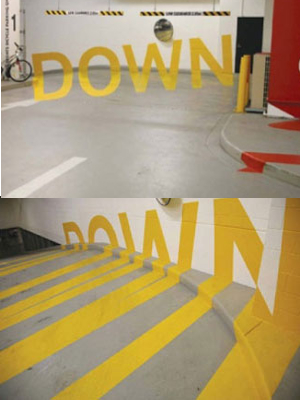 Depth Deception is what happens when depth perception goes wrong.

Sometimes, often due to uncommon conditions such as viewing through a telescope, camera or other similar optical device, people can get confused and mistake something small and close (such as an insect) for something far and huge (such as an Attacking 50 Foot Whatever ). Or vice versa. For reasons closely related to the Rule of Funny, this happens more often in fiction than in Real Life, though Truth in Television cases are not unheard of.

Subtropes include Big Little Man, where a character is introduced as being much bigger or smaller than they really are, and Profile View Gag, where an object appears shorter or longer when viewed from the side.

Compare That's No Moon!, where a large object is mistaken for an equally large but more mundane object. See also Perspective Magic, where this can be used to manipulate reality.

When it's used intentionally as a camera technique — one of the oldest special effects on record — it's called Forced Perspective.

Not to be confused with Depth Perplexion.

Pen blows the basket from afar

Pen's first instinct is to blow the basket in the far distance in the air from where he's standing, and it worked.

Pen blows the basket from afar

Pen's first instinct is to blow the basket in the far distance in the air from where he's standing, and it worked.