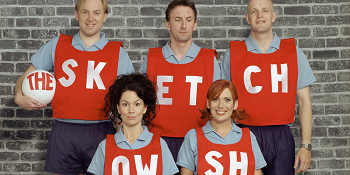 The Sketch Show is a British, well... sketch show which ran between 2001 and 2004. The five-person cast was composed of comedians Lee Mack, Tim Vine, Jim Tavaré, Karen Taylor, Ronni Ancona (for Series 1) and Kitty Flanagan (for series 2). With no overall plot, the show's episodes were composed entirely of short comedy sketches.

It spawned a short-lived American remake, headlined by Kelsey Grammer, though he only appeared in the opening and closing scenes of each episode, also starring Malcolm Barrett, Kaitlin Olson, Paul F Tompkins, Mary Lynn Rajskub and Lee Mack, often though not always as the characters he played in the original. Most sketches were line for line based on the original show, though with some variation in the punchlines.