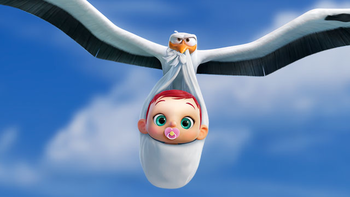 They can grip them by the husk.
Calvin: Dad, where do babies come from? Is it true a stork leaves them swaddled in a bundle on the front step?
Calvin's dad: In most cases, yes, but you were unceremoniously dumped down the chimney by a big, hairy pterodactyl.
— Calvin and Hobbes
Advertisement:

For many years, when a kid whose parents didn't think they were ready for The Talk asked the question "Where do babies come from?", a common answer was "the stork".

For those wondering exactly how storks became associated with pregnancy: The tradition apparently started in Victorian Britain. The White Stork was considered a symbol of happiness, fertility, and prosperity. Storks were known to nest on chimney tops in England, so the mythology of storks dropping baby humans down the chimney was made quite quickly.

The myth has mostly died down, to the point where TV is usually the only place you'll see kids who believe in "the stork". Showing childbirth in the media hasn't been taboo since the 50's, so most children know babies come from the mother's body, just not how it got there in the first place. But then again, it's also never explained where storks get babies either. Nonetheless, the symbolism of storks and babies has persisted to this day, where the image of a stork with a bundled baby hanging from its beak is still a symbol of pregnancy, childbirth, and babies.

Occasionally overlaps with One-Gender Race as an explanation for how procreation can occur without both sexes present.

The rival story that new babies were found under a gooseberry bush seems to have died out, though some guy named Xavier did make a small fortune with the mythology of babies being grown from cabbages...

Compare Pelican Package Pouch and Flying Postman. Contrast Circling Vultures, for a bird associated with death rather than birth.

A very different portrayal from the usual.

A very different portrayal from the usual.