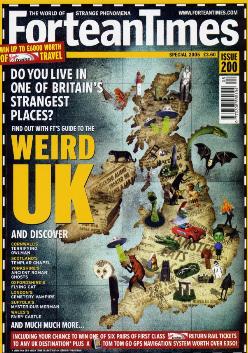 A whole World of Weirdness between the covers
Advertisement:

The Fortean Times can trace its roots back to a 1960's-1970's Fanzine called The News — "A Miscellany of Fortean Curiosities. This was self-produced by creator Bob Rickard, and from its earliest beginnings drew in people who would become famous for other works, such as Steve Moore and Colin Wilson. Like so many other print media these days it can be found online.

Dedicated to the works and philosophy of Charles Hoy Fort, an eccentric American who meticulously collected and catalogued anomalous phenomena inexplicable or thought impossible by orthodox science, the magazine soon took on a more professional footing and was professionally produced on a bimonthly basis. Paul Sieveking joined the production team in 1978, and he and Rickard have been at the heart of the publication ever since. As revenue increased, the magazine went from monochrome to full colour to a larger A4 format, published monthly, in the early 1990's.

Areas covered by FT include:

Tropes currently anomalous and incapable of being explained by science include: