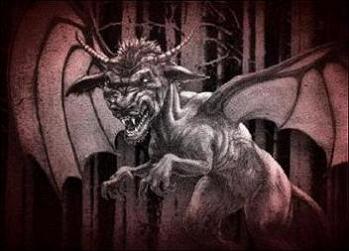 "Ram's head, forked tail, clove hoof, love's my trail
I sup on your body, sip on your blood like wine
Out world theirs, this world mine."
— Bruce Springsteen, "A Night With the Jersey Devil"

No, not the hockey team (although the team is named after the creature.)

A cryptid which was supposedly first spotted in the 1700s in the Pine Barrens of South Jersey, the Jersey Devil is often described as a horned, hooved and bipedal Mix and Match Critter possessing bat-like wings, a horse or goat-like head and an inconsistent origin. The most common version of the creature's tale is that it is the thirteenth child of Mother Leeds, a whore and/or witch who, while giving birth, yelled out "let it be the devil!" for varying reasons, such as preferring to birth the spawn of Satan instead of another one of her husband's children. Either immediately or shortly after being born, the child transformed into a monster, and fled into the wilderness, subsequently becoming "an East Coast Bigfoot".

Some have noted that the Jersey Devil, the Dover Demon and the Moth Man may be one and the same. Also see Fearsome Critters of American Folklore, Our Cryptids Are More Mysterious, Chupacabra, Wendigo, and Bigfoot, Sasquatch and Yeti. May or may not be friends with fellow backwoods Joisey ghoul Jason Voorhees.