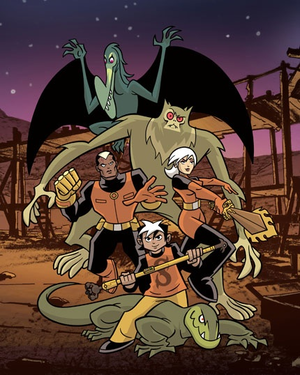 The show follows the titular Saturdays, a family of cryptozoologists consisting of parents Doc and Drew, their biological son, Zak, their adopted son, a Fiskerton phantom named Fisk, and their pet Komodo dragon. They belong to an international organization known as the Secret Scientists, whose mission statement is to uncover the secrets of the world before those who would use them for ill get the chance.

Eleven years prior to the story, Doc and Drew unearthed a mystical item from a Sumerian archaeological dig called the Kur Stone. It was then stolen by V.V. Argost, the beloved host of TV's Weird World. He aims to find Kur, an ancient Sumerian cryptid said to have the power to raise a cryptid army, with which he intends to Take Over the World. Although the Scientists were able to retrieve and dismantle it, eleven years later, Argost has figured out who was guarding which piece, and begins the chase anew...

The show can best be described as Jonny Quest crossed with The Herculoids with a touch of B-list horror thrown in, with Stephens citing artist Alex Toth and Hanna-Barbera's 1960s action-adventure programming as large influences.

One of the most under-appreciated series to air on the network, The Secret Saturdays was shuffled from timeslot to timeslot and given virtually no advertising or reruns. The characters made an appearance years later in the Ben 10: Omniverse episode "T.G.I.S. (Thank Goodness It's Saturday)", albeit with different voice actors.

Tropes in the crossover episode:

In the final scene of the season finale, the Saturdays learn that Kur isn't the giant cryptid they just fought, but actually ZAK!

In the final scene of the season finale, the Saturdays learn that Kur isn't the giant cryptid they just fought, but actually ZAK!