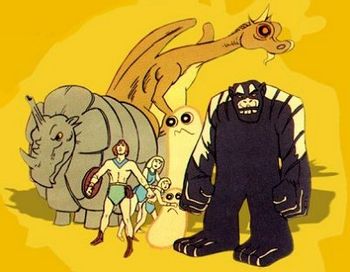 "Somewhere out in space live the Herculoids:
Zok, the laser-ray dragon, Igoo the giant rock ape
Tundro the Tremendous, Gloop and Gleep the formless, fearless wonders!
With Zandor their leader, and his wife Tara and son Dorno, they team up to protect their planet from sinister invaders!
All strong, all brave, all heroes!
They're the Herculoids!"
—Opening Narration
Advertisement:

This 1960s Animated Series from Hanna-Barbera was unlike its contemporary, Space Ghost, in that it was set on Amzotnote Quasar in the 1980s Space Stars revival, a primitive planet protected by King Zandornote Just "Zandor" in the original series. Zandor's wife, Tara, and their son, Dorno, were the only other known human inhabitants. For some reason, aliens kept trying to conquer an isolated, largely uninhabited jungle world full of monsters. Go figure.

When trouble arose, Zandor commanded a small army of exotic beasts: Gloop and Gleep, a pair of gelatinous shape-shifters; Igoo, an ape with rocklike skin; Tundro, a rhino-triceratops-like creature that could shoot burning rocks from its horn, and Zok, a flying dragon capable of firing laser beams from its eyes and tail.

In the early 1980s, the Herculoids joined Space Ghost in the Animated Anthology series Space Stars. In 2016, they also joined most of the other 1960's Hanna-Barbera adventure heroes for the massive multiplayer crossover comic book Future Quest.