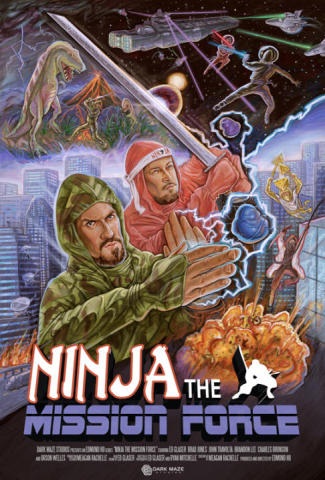 Coming soon, on this screen!
Only a ninja can defeat a ninja.
Advertisement:

Back in the '80s, infamous Hong Kong B-movie director Godfrey Ho teamed up with producers Joseph Lai and Thomas Tang to release cheap ninja films onto the market by taking existing Asian films and adding extra scenes featuring occidental ninjas doing ninja things, and dubbing the whole thing to tie the original movie in with the general plot of the new scenes. The result was the So Bad, It's Good Godfrey Ho Ninja Movies.

In 2012, director Ed Glaser decided to make a web series based around the concept

, shooting ninja scenes also featuring himself, and other actors such as Brad Jones and Allison Pregler, and splicing them in with scenes from assorted movies in the public domain. Each episode features a different film cut up and dubbed to fit the general plot.

That plot being that Evil Ninja Bruce (Brad Jones) wants the Six Avian Ninja Warriors (which are just rubber duckies in ninja costumes) to gain supreme ninja power and Take Over the World (because of course he does), but Interpol agent and ninja master Gordon (Ed Glaser in a silly wig, and numerous stock footage actors-slash-clever disguises) must stop him, with the help of his various allies throughout the world.

A second season came out on DVD in March 2013. Allison Pregler is the new addition to the cast, starring as Cheetah Lee.