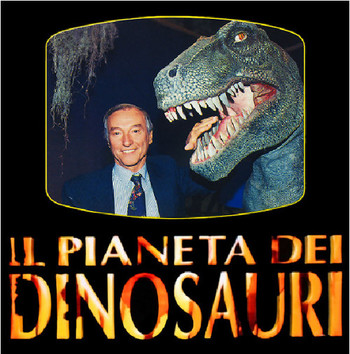 "The last scene of The Planet of the Dinosaurs we've seen was very sad and even a bit moving. But we won't end with these images of devastation and death. We would preserve about these extraordinary animals a lively image and remember them during their best moments, when filled the Earth with their mightiness and with their vitality."
— Piero Angela (the show's producer and host), at the end of the last episode.
Advertisement:

The Planet of the Dinosaurs or Planet of Dinosaurs ("Il Pianeta Dei Dinosauri") was an Italian Speculative Documentary from 1993, the same year in which the movie Jurassic Park was broadcast in this country. It was quite well-informed and popular, to the point to be translated in English and French and broadcast in USA and other countries worldwide — in Italy it was nearly as popular as Jurassic Park itself, and stood the competition from the Walking with Dinosaurs series and from other similar series in the 2000s.

It's divided in four hourlong episodes, always followed by a commentary. It’s produced and hosted by the most popular italian science-writer of the XX-XXI centuries (Piero Angela, basically the Italian equivalent of British David Attenborough), and has actually the canadian researcher Dale Russell as the main paleontological consultant. Angela appears actually split in two “twin hosts” which talk each other: one remains in the studio (shaped like a hi-tech prehistoric cave), while the other time-travels in a “mesozoic world” and interacts with living dinosaurs. Like in WWD, landscapes are filmed from Real Life with some elements deliberately added as said in a backstage episode, but dinosaurs and other critters met in the time-journey were animatronic puppets: CGI was still rare in docus at the time — this could have been one of the earliest examples, all visible outside the prehistoric voyage. As is typical for Angela's programs the score is entirely synth-made except for some inserpts which have classical or jazz music. The show has also an accompanying book with the same name, written by Piero Angela as well with the aid of his palaeontologist son Alberto. The documentary is still popular in Italy, and many dino-fans of this country still love watching the eight videotapes extracted from the show, with the four episodes divided in two halves each (without the commentaries).

It shows examples of: