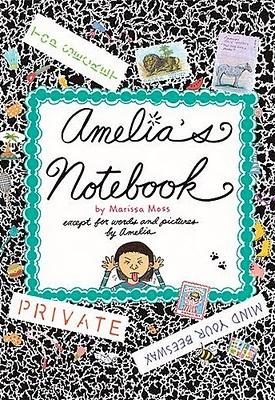 A series of realistic fiction books written by Marissa Moss and published by Simon and Schuster (who also did licensed books based on Full House, Sabrina the Teenage Witch, Bob the Builder, Dora the Explorer, Clueless and SpongeBob SquarePants).

The series follows the everyday events in the life of Amelia, an ordinary girl living in the Pacific northwest. The series opened with Amelia learning how to adjust to moving to a new state. Later books center around other problems that most girls eventually have to deal with, such as crushes, making the jump to middle school, gossip, and babysitting.

Every book is told in an undated diary format, with just as many doodles in the margins and photographs and random objects taped inside as one would expect from a preteen girl. American Girl magazine also ran a column for her, for nearly a decade. Scholastic also published the whole Amelia's Notebook series due to a licensing agreement with Marissa Moss (hence having their logo stamped on a spine as their certification mark).

Not to be confused with Amelia Bedelia or Amelia "Mia" Thermopolis (from The Princess Diaries).