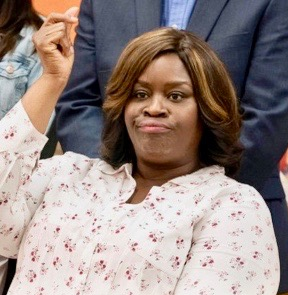 "Treat yo'self!"
I got this Black chick that don't know how to act
She's always talking out her neck, making her fingers snap
She like, "Listen, Jiggaman, I don't care if you rap
You better R-E-S-P-E-C-T me"
— Jay-Z, "Girls, Girls, Girls"
Advertisement:

Since the era of Jim Crow and the Civil Rights Movement, Black people were more visible and could be more outspoken — to a point, particularly if they were female. To illustrate this, sassy "Mammy" figures could scold the family they worked for and playfully berate their employers (so the authors could show that Blacks were not being oppressed). And because of the feminism movement, this was especially the case for Black women. Combine these, and you get the sassy Black woman. It started with the heroines of blaxploitation movies, like Coffy and Foxy Brown (both played by Pam Grier), and continued into the 1980s.

She's defined by her vivaciousness, humor and joie de vivre, and can make a good counterpoint to the more grim or snarky members of the cast. In complete contrast to her other variation, is not only a pleasure to be around, but is also so the go to girl for advice and help. These characters usually make good leaders, because though generally fun, insightful, they are still firm in decisions, trustworthy, and speak their minds. Also like the Spicy Latina, the character will usually be sexually liberated and have no qualms acting in a sexual manner, though usually in a less pronounced manner. The positive version is now portrayed a lot more than the negative version, mainly because of the Unfortunate Implications that portraying Black women in only this way had. It's also rather common for the positive variant to be the Only Sane Woman of a group, in which case her "sass" will be more like "exasperated sarcasm".

The odds that she's a Fag Hag are directly proportionate to her weight. Arguably the Distaff Counterpart to the Scary Black Man, though she can be quite scary herself when pissed off. Might also be a white character's Token Black Friend. Close cousin to the Spicy Latina.

There is a variation on this, more subdued but no less expressive: the regal Deadpan Snarker, who will often be well-spoken and articulate, with a more highbrow vocabulary and a regal, imperious manner of expressing herself, but still willing to toss subtle (or unsubtle) barbs and make herself heard. Perhaps the best known of this "African Queen" variation is the X-Man Storm.

Note that this trope might well be on its way to becoming a Discredited Trope - it's seen as stereotypical and lazy writing and people want to see minority characters given the same nuanced characterisation as anyone else.