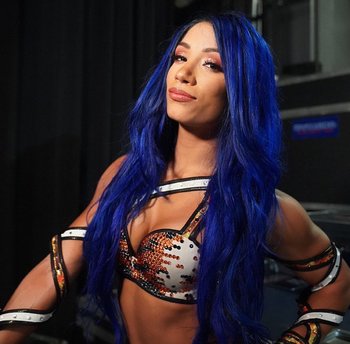 Mercedes Justine Kaestner-Varnado (born January 26, 1992) is an American professional wrestler. She is currently signed to WWE, where she wrestles under the SmackDown brand as Sasha Banks.

Mercees trained in Chaotic Wrestling and debuted for them in 2010 under the name Mercedes KV, where she teamed with Nikki Roxx and won their Women's Title belt from Alexxis in 2011. She's also worked for NWA On Fire, Beyond, NECW and Top Rope Promotions, and won the RWC No Limit Title belt in 2012 before signing to WWE.

Under her current ring name, she is one fourth of WWE's "Four Horsewomen" (alongside Charlotte Flair, Bayley, and Becky Lynch), a cohort of four women who came through NXT and were a major part of the revolution of women's wrestling in WWE, through their stellar matches.