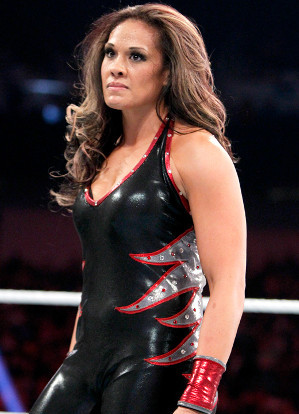 Sarona Moana-Marie Reiher Snuka-Polamalu (born January 10, 1978) is a Fijian-American Professional Wrestler from Vancouver, WA currently signed to WWE as Tamina Snuka. She is the daughter of WWE Hall of Famer Jimmy "Superfly" Snuka. She debuted in 2009 after training at the Wild Samoan Training Center with her first matches taking place on cards held by their World Xtreme Wrestling promotion. She arrived in WWE's developmental program FCW in 2010 and made her WWE TV debut on the May 24, 2010 SmackDown!. Her original role was as the manager for The Usos, as a counter to Natalya in their feud with the Hart Dynasty. She went on to a storyline relationship with Santino Marella and has bounced around the midcard ever since. She has finally won a title in WWE in 2021, capturing WWE Women's Tag Team Championships with Natalya.