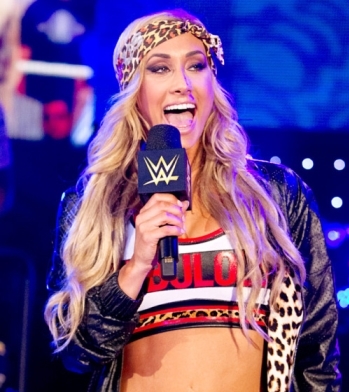 Leah Van Dale (born October 23, 1987) is an American professional wrestler former cheerleader and dancer, currently signed with WWE under the ring name Carmella. Debuting for WWE NXT in late 2014, she appeared in a segment where she portrayed a hairdresser for Enzo Amore and Colin "Big Cass" Cassady. The pair's shenanigans cost Carmella her job at the hair salon and she begrudingly accepted an offer to be the team's valet, while also competing in the ring. Once Enzo and Cass were called to the main roster in 2016, Carmella remained in NXT in order to strengthen her in-ring skills, but was called up to the main roster four months later. In 2017, she became the inaugural female Money in the Bank winner. Twice. She finally cashed in on the SmackDown after WrestleMania 34 against champion Charlotte who had just been mugged by a debuting Billie Kay and Peyton Royce to become SmackDown Women's Champion

for the first time.