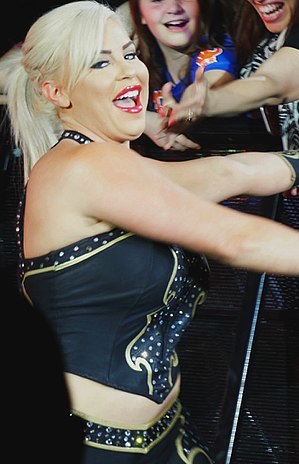 Ashley Mae Sebera (born November 29, 1988) is an American professional wrestler currently signed to WWE. A former bodybuilder, fitness model, gymnast and diver, Sebera was signed to a developmental deal with WWE NXT in 2013, performing under the ring name Dana Brooke. She made her NXT TV debut in 2015 as a Heel, eventually forming Team Disingenuous with Emma, who had recently returned to NXT following a disastrous run on the main roster. This alliance carried over to the main roster after Emma re-debuted in March 2016, with Dana joining her two months later. Emma got injured soon after and Dana started teaming with Charlotte instead.

Recently, due to not finding much success in the ring, she's starting hanging with Titus Worldwide as their "Numbers Analyst."

"You will never see your name written in the sky! I'm here to trope you down to earth":