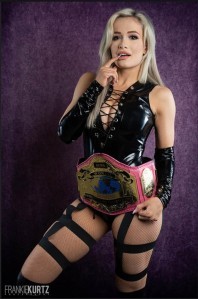 Elizabeth Chihaia (born May 13, 1991) is an American Professional Wrestler, valet and ring announcer as Scarlett Bordeaux. She debuted in 2011 after training under Al Snow and Nick Dinsmore, and has wrestled for Chicago Style Wrestling, Ohio Valley Wrestling, AAA, Impact Wrestling, MCW Pro Wrestling (formerly Maryland Championship Wrestling), and other promotions. She is best known for her work for Ring of Honor.