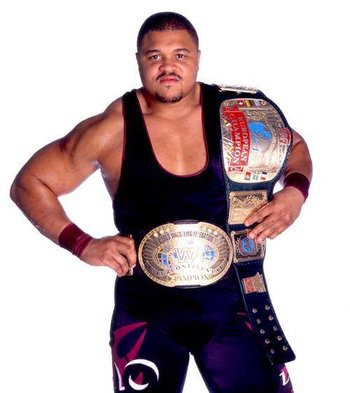 V1: He marked out to someone marking out to him! That's so fucking carnie!
Jay: When we saw him at TNA and recognized him, he got all stroppy about it. Just show us to our seats without the sass.
—OSW Review, Ep. 40
Advertisement:

Accie Julius Conner (born October 22, 1972) is an American Professional Wrestler from Burlington, New Jersey who is best known for his work in WWE from 1997-2003 as D'Lo Brown. Beginning his career in Jersey, D'Lo was soon scouted by the then WWF while working for SMW. In 1995 he wrestled for Heartland Wrestling Association becoming the inaugural champion for the HWA Heavyweight Title

, which he's won twice. Around that time, he participated in several tryout matches for WWE until 1997, where he severed as a random mook in The Nation of Domination. As time went on, D'Lo became an Ascended Extra in the Nation to the point where he was the only member Faarooq didn't fire after they failed him. He stayed a member until the stable's end in 1998, before becoming a successful singles mid-carder. In 1999, Brown took responsibility for crippling wrestler, Darren Drozdov in a match. After the incident D'Lo stayed in the lower mid-card for years until being released in 2003. Over the course of his WWE run, he would hold the WWF European Title

once. He held both titles simultaneously during a feud with Jeff Jarrett and Mark Henry. D'Lo made a brief WWE return from 2008-2009.

D'Lo would also have three stints in TNA, the first features him in tag teams with AJ Styles and Gran Apolo whom he won the TNA World Tag Team Titles

. The second, he served as a road agent for TNA for years...until it was revealed that he was the Vice President of the Aces & Eights. As of 2019, D'Lo is back in Impact in a backstage role.

with Matt Stryker in the process).

"You better recognize these tropes!":