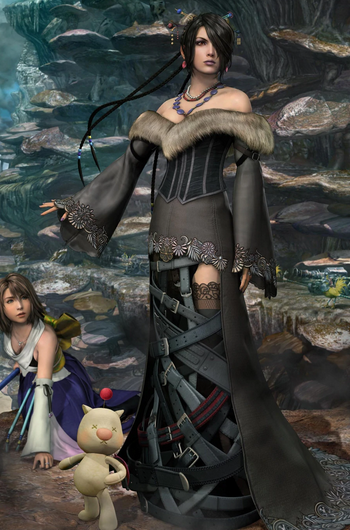 "Time to buckle down, Yuna." "How? You took them all."
"Ladies, I hope you're wearin' two belts, 'cause I just charmed the pants off y'all!"
— Homestar Runner, Homestar Runner
Advertisement:

Wanna spruce up the look of your fantasy/RPG character? Just add an extra belt, preferably one with a nice, big buckle. What? Your character already has one? Just add another, draped casually across their hips! While you're at it, wrap two or three of them around their shin, and another four over their sleeves. Oh, and we can't forget two more making a big X on their chest... So what if they're not attached to anything? Decorate the belts with Power Crystals or Spikes of Villainy, and now even the skimpiest Spy Catsuit can be stronger than plate mail! Maybe they keep your guts from spilling out or something.

Many characters in fantasy, steampunk, anime and even a few sci-fi settings will sport more belts than they really need. Either they were having a clearance sale at JCPenney or they have some weird obsession with belts that borders on the fetishistic, especially when they don't even need a belt where it is, or even use it to carry things, and wear one anyway. One of the last places you will often see these people wearing a belt is tight around their waist.

This also goes well for zippers — zippers on your shirt, on your sleeves, on your pants, on your coat, on your hat...

This is extremely common in Japan in Real Life, hence its appearance in so many works of fiction that come out of there. This is also a trend in certain fashion subcultures in the West, though not as prominent.

Compare Goggles Do Nothing, Rummage Sale Reject, Impossibly Cool Clothes, and Chained by Fashion. Often overlaps with Fashionable Asymmetry. If the belts are shown to serve an actual purpose besides holding up the wearer's trousers and/or looking cool, see Utility Belt. A subtrope of Useless Accessory.