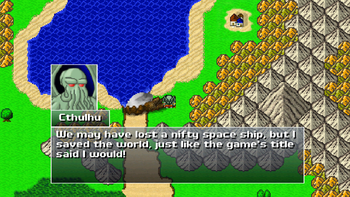 Cthulhu Saves the World is a 16-Bit style Eastern RPG from independent developer Zeboyd Games, with tongue in cheek Lovecraftian humor, rampant Lampshading of JRPG tropes, and No Fourth Wall to speak of. It was released on December 30, 2010 for Xbox Live Arcade, with a proper Xbox 360 and PC port getting funded on Kickstarter and following a year later, and an iOS port launching in 2012. It has built a reputation as both a loving tribute and parody of the 16-bit JRPG since then.

See also Breath of Death VII, the spiritual predecessor of Cthulhu Saves the World, which features similar gameplay and writing. Both games are available on Steam in a two-for-one pack, or can be bought separately on Xbox Live Indie Games on the Xbox 360.

A prequel, Cthulhu Saves Christmas, was released on December 23, 2019. In it, Cthulhu saves Christmas after the League of Christmas Evil grants the opposite of Cthulhu's wish and drains his power.