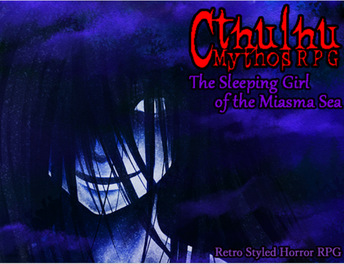 That isn't even her final form...
Advertisement:

Cthulhu Mythos RPG - The Sleeping Girl Of The Miasma Sea is a Survival Horror RPG based on the Cthulhu Mythos. It was developed by Alchemy Blue, and released for PC through Steam on September 26th, 2018.

You play with a custom character and their friends who enter an abandoned mansion for a "test of courage." They soon find they're not alone and have to confront everything from enlarged insects and ghosts, to Lovecraftian monsters like zombies and Yuggothians. To make matters worse, they encounter a creepy girl who chases them around the place after transforming into a horrible monster. With their companions, it's the player's job to overcome the terror of the mansion and unravel its secrets, all while relying on what few resources they can find to maintain their health and sanity.

Cthulhu Mythos RPG -The Sleeping Girl Of The Miasma Sea provides examples of the following tropes: