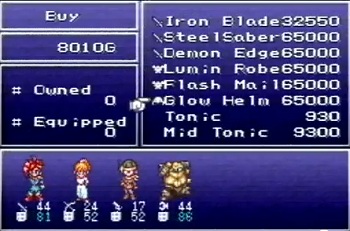 Don't worry Crono, you'll be able to afford that someday.
Merchant: Alright... I think you're gonna like these a lot. Let me show you. (Presents a gold katana) ...Boom.
Protagonist: Okay, that's what I'm talkin' about! This is all I need! How much is this one?
Merchant: Now this one is... 800,000 Red Gems.
Protagonist: Eight—(Scoffs and turns away in disbelief) ...Can I bargain?
Merchant: Oh, the prices never change in this game.
Protagonist: ...Look, that is too much. That is everything I've got! How am I supposed to eat?
Merchant: ...Are you injured?
Protagonist: ...No.
Merchant: ...What do you need food for?
— Calebcity, RPG Game Logic

The heroes have arrived at the next town and, in standard Role-Playing Game fashion, head over to the weapon and item shop to upgrade all their gear. They count out some gold to spend, check out some Absurdly Sharp Blades, and get ready to make their purchase.

Only to find that the item is being sold for... A Million Gold?

Teaser equipment occurs when a store is selling powerful and expensive weapons, armor, accessories, or other items for a price far more than the player is expected to have at that point in the game. This is primarily a RPG trope, though other games can also qualify. An instance of teaser equipment generally means one of two things - either you will return later to the town (with more levels, gold, and more powerful gear), or the gear will become more reasonably priced after you've advanced in the plot or undertaken a side-quest to lower the shop prices.

Teaser equipment is incompatible with Sequence Breaking - if you come across equipment far beyond your ability to purchase because you've gone outside the plot, it is not an example of this trope. A subtrope of Game-Breaker if you are actually able to purchase the item in question, either through frugality or farming gold; may also be a Disc-One Nuke if acquired early enough. Related also to Adam Smith Hates Your Guts, the difference being that whereas the price of the equipment doesn't increase over time, it starts off prohibitively high and your wealth increases to compensate. Compare with Level-Locked Loot - instead of Character Levels prohibiting your ability to use certain items, insufficient gold blocks access; these two are not mutually exclusive. Almost never the Infinity +1 Sword, though particularly triumphant examples may be the Infinity -1 Sword.

Don't confuse with A Taste of Power - that trope is when you get to use really high powered gear early in the game, only to have it taken away from you, while this one taunts you with said gear in the item shop, but you don't get to acquire it until later. Or with Equipment Spoiler (where the presence of affordable but unusable equipment foreshadows a new party member). A specific type of inversion of the Sorting Algorithm of Weapon Effectiveness.