Video Game / Star Ocean: Till the End of Time 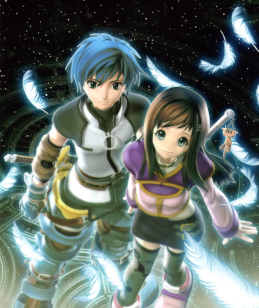 Star Ocean: Till the End of Time is the third console installment in the Star Ocean series set 400 years after the events of Star Ocean: The Second Story. Fayt Leingod, an ordinary college student, is vacationing on a resort planet which suddenly gets attacked by aliens. A few escapes later, his escape pod crash lands on an undeveloped planet, where he eventually gets rescued by Cliff Fittir, a member of a resistance group named Quark. After crashing on another undeveloped planet, they get caught up in the local politics. The repercussions of the alien attack, and the reasons for it, are going to catch up with Fayt again....

Till the End of Time is (in)famous for the huge plot twist that comes about halfway through the story that completely changes the scope of not just the game, but the entire series itself.

A remastered version was released in Japan on March 30, 2017 and in North America on May 23, 2017 for the PlayStation 4. It features upscaled graphics and trophy support.