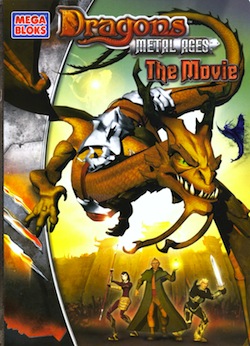 Dragons II: The Metal Ages is a 2005 television animated adventure film, and the sequel to the 2004 film Dragons: Fire & Ice.

The movie starts with Scylla, high priestess and queen of the Odaku army, writing strange symbols on the surface of a mountain. Using these symbols and a magic fire, she summons Shadow Dragons Gryndel and Daakon, the spirits of two evil dragons who were exiled from their world by its king. She offers to open a portal to the Dragon Realm if they aid her in battle against the Norvagen and Draigar... and you can tell where this is going.

Has nothing to do with DragonForce.