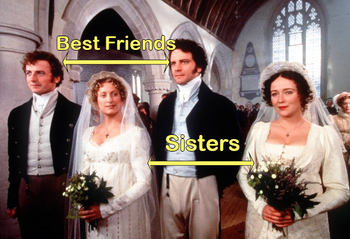 In fiction (not to mention Real Life), it's not uncommon for friends to be as close as family. (After all, Friends Are Chosen, Family Aren't.) For the most part, such relationships go unformalised. You might wish you could make a friend an official relative, but your options are limited. Adoption is difficult, especially when both people involved are adults. And marrying your friend probably isn't an option if you just don't feel that way about each other.

But there is another option that some characters take: marry one of your friend's relatives! Or fix it so that one of your relatives marries one of theirs. Then you'll become in-laws, which is almost as good as being blood relatives and gives you an excuse to spend vacations and holidays together. Some common variations:

Often in these situations, the romantic relationship comes off as secondary to the platonic one, with the spouse potentially being a Satellite Love Interest. Sometimes the platonic relationship may even be the primary motivator for the marriage, though it's hoped that most characters genuinely Marry for Love.

May overlap with Settle for Sibling or Double In-Law Marriage. Not to be confused with making friends of your in-laws.

Especially in modern times, when marriage rates are on the decline, a long-term non-married relationship can qualify for this trope, provided it brings two friends closer together and doesn't create tension between them.