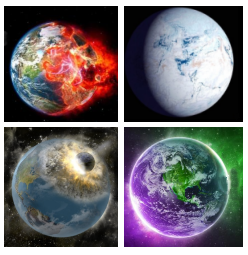 Fire, ice, asteroid... gamma rays — There are just so many ways!
"God gave Noah the rainbow sign,
No more water, the fire next time."
— "Mary, Don't You Weep," author unknown, but known to be of antebellum origin
Advertisement:

While The End of the World as We Know It is very common in fiction, there are a wide variety of ways in which it can actually manifest; this can be measured on two sliding scales, depending on the size of the "world" in question, and to exactly what extent it "ends". This is derived in part from Bruce Sterling's analysis

of ways in which the Real Life world could theoretically end.

Not to be confused with the comedy survival guide by Rob Kutner, which gives advice for surviving the relatively low-severity events, or the Discovery Channel series by the same name which explores various scenarios in which this could play out.

See also: Sliding Scale of Villain Threat, Evil Only Has to Win Once and Why You Should Destroy the Planet Earth. If they actually show it, then you have an Apocalypse Wow. Contrast with Unspecified Apocalypse. Not to be confused with the movie on whose title this trope is a pun.

A Class X-2 example: the destruction of an entire star system, and the deaths of over 300,000 Batarians, is a small price to pay to halt the Reapers' arrival.

A Class X-2 example: the destruction of an entire star system, and the deaths of over 300,000 Batarians, is a small price to pay to halt the Reapers' arrival.