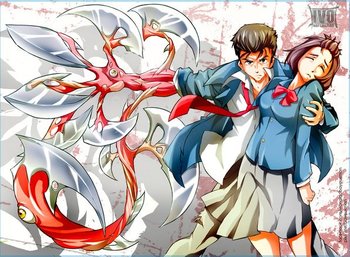 Heroes perform amazing feats, save the day and everything's golden. But Where Do They Get All Those Wonderful Abilities? The answer is an alien (or demon or robot) latched on and the hero gets some nifty superpowers as a result. Often times this tenant will be a Superpowered Alter Ego and may not share the hero's agenda.

This is when a Viral Transformation works smarter and You're Nothing Without Your Phlebotinum can actually be true; for the more holistic transformation see Fusion Dance. Compare with The Symbiote as it is a similar "other being causes Super Empowering" trope. Also compare Powers via Possession, Willing Channeler, Pro-Human Transhuman, and Bad Powers, Good People; contrast Superhuman Transfusion, Symbiotic Possession, Transhuman Treachery, and Bad Powers, Bad People.