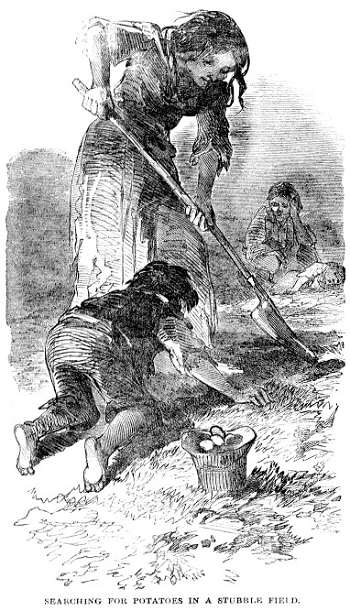 "There was a great famine in Samaria; and behold, they besieged it, until a donkey's head was sold for eighty shekels of silver, and a fourth of a kab of dove's dung for five shekels of silver. Now it came about after this, that Ben-hadad king of Aram gathered all his army and went up and besieged Samaria."
— 2 Kings 6:24-25
Advertisement:

Famine is, simply put, the widespread scarcity of food in a society, and can be caused by natural calamities such as floods, droughts, or crop failures, or by human factors such as war, economic upheaval, or overpopulation.

A famine can be the starter of a story: The hero might have to flee his starving homeland or go elsewhere to search for food. It can also merely be the setting of the story, providing the excuse for the existence of a Black Market, showing the results of the tyranny of the local despot, contrasting those who do have food with those who are starving, explaining No Party Like a Donner Party and Reduced to Ratburgers, or describing one of the facets of After the End.

Famine used to be a feared event for humans, resulting in it being depicted as a divine punishment or something you prayed to the gods to avoid. Revolutions and mass migrations erupted over famines, and authorities would go to extreme ends to prevent them.

Depending of the gravity, the consequences can range from Societal Disruption or Collapse on a Regional Scale to Planetary-scale Societal Collapse.

See Horsemen of the Apocalypse and After the End. This trope is Wizard Needs Food Badly on a societal scale.