Film / Night of the Bloody Apes 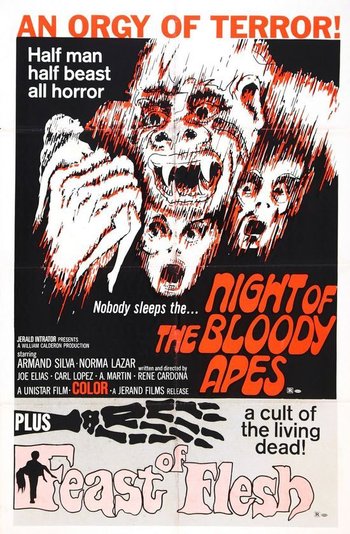 “I’ll say that’s absurd, the proofs are circumstantial, it’s more probable that of late more and more you’ve been watching on your television many of those pictures of terror.”
— Lt. Martinez
Advertisement:

The plot concerns a Mad Scientist named Dr. Krallman (Moreno) who transplants a gorilla's heart into his dying son Julio (Agustín Martínez Solares), saving Julio's life but causing him to mutate into a monstrous, ape-like creature who embarks on a rape and murder spree before being brought to justice by a luchadora named Lucy Osorio (Lazareno). The plot of the film does not concern Lucy bringing the ape-man to justice — rather, she has a much less pronounced role in the plot, the focus being primarily on Dr. Krallman and his increasingly desperate attempts to rescue his son from death.

Absolutely no relation to Planet of the Apes.

Tropes of the Bloody Apes: