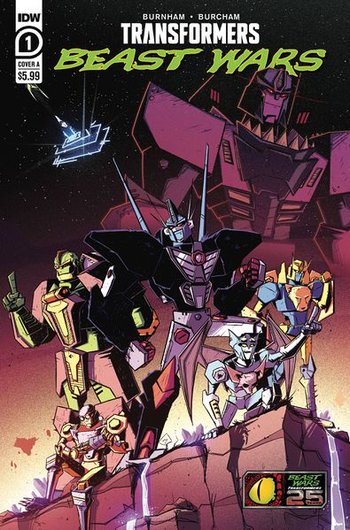 Twenty-five years later, and the Beast Wars have begun anew!
"This world is rich in energon, and it will be ours. But before we can overthrow the Maximals of our homeworld, we must first deal with the ones who followed us and caused us to crash. We survived that crash... and until I see their corpses with my own eyes, it only makes sense to believe they did as well. We have enemies here, on this little planet. Enemies we will eliminate. A new war has come, my friends... and this time, it is ours to win."
—Megatron, Transformers: Beast Wars #1
Advertisement:

Centuries after the end of the Great War, a small squadron of Maximals — the Autobots' descendants — pursue a team of Predacons — the Decepticons' descendants — who have stolen a spacecraft and an ancient artifact known as the Golden Disk. Both sides end up travelling through time and crashing on a mysterious world. Rebuilt by their ships into organic modes to shield them from the planet's heavy Energon radiation, an entirely new war has begun to unfold.