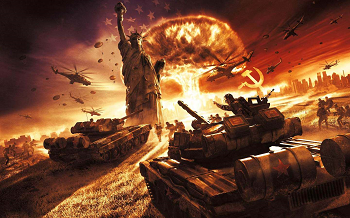 Some psychologists believe Humans Are Warriors and naturally predisposed towards violence. For almost the entire twentieth century it seemed like humanity was teetering on the brink of self-destruction: both World Wars, the Cold War, and then the threat of terrorism, nuclear proliferation, and biological warfare - and all that after World War I was going to be "The War to End All Wars". Luckily for humanity, World War III has been in Development Hell for more than half a century now - and long may it stay there (indeed, it's not a sequel anyone is looking forward to, we hope). So it's probably only natural that the next great global conflict is a popular subject in Speculative Fiction.

Weapons of Mass Destruction are probably going to get used, often recklessly, causing massive casualties.note In fiction, anyway; in Real Life it's possible it might just be another very destructive conventional war, if it ever happens, due to the sheer suicidal nature of the usage of nuclear weapons. Then again, if a conventional war is actually fought, escalation to nuclear war is quite likely. A commonly-used Gallows Humor joke is about this war's length; somewhere around an hour. If the destruction gets too out of hand it might result in The End of the World as We Know It, causing an After the End situation set on a Scavenger World. If not, the winner might set up a One World Order, in which our heroes fight against The Government in a dystopian Cyberpunk type environment. Of course, it's entirely possible for the war to kill everybody, and have it center on the attendees to Humanity's Wake. If the show was made before 1989, Communists are involved, even if the war is supposedly set years after 1989. A more modern take on WWIII is that it begins somewhere in the Middle East; Israel, Iran, India and Pakistan may be involved. Other times, it involves a resurgent Russia and more recently, North Korea. China also gets used when the work's creator isn't so worried about the consequences for that. Scenarios which have China, North Korea and/or Middle Eastern powers as the antagonists may actually involve Russia joining the Western side.

It's rare to find a piece of fiction set 20 Minutes into the Future that could resist the temptation to slap a global war into the middle of the twenty minutes. Wiping out a third of humanity must just be too much for writers to resist. (Though since the end of the Cold War, this has lessened; writers wanting to do away with a third of humanity usually go for a plague or Global Warming-related chaos.) A common way to establish the otherness of a future or Alternate History setting is to have a throwaway remark about World War III having occurred in the past.

For numbers greater than III, see World War Whatever. For stories about stopping this from coming to pass, see Prevent the War. Compare and contrast to Avoiding the Great War.

There are some associated sub-tropes with this setup in particular:

The After the End scenarios that aren't "Oh no, we accidentally invented a supervirus/oxygen-destroying chemical/pie so delicious it kills you."