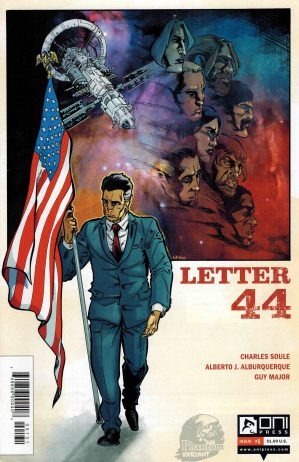 Letter 44 is a sci-fi and political drama comic book series written by Charles Soule and published by Oni Press.

On Inauguration Day, newly elected President Stephen Blades hoped to tackle the most critical issues facing the nation: war, the economy, and a failing health care system. But in a letter penned by the outgoing President, Blades learns the truth that redefines "critical": seven years ago, NASA discovered an alien presence in the asteroid belt, and kept it a secret from the world. A stealth mission crewed by nine astronauts was sent to make contact, and they're getting close - assuming they survive the long journey to reach their destination.

Tentative plans for a TV adaptation are being shopped around at major networks.