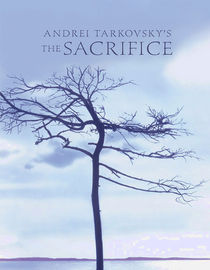 The Sacrifice is the final film by lauded Russian director Andrei Tarkovsky, released in 1986.

It begins as the story of Alexander, an old retired actor whose friends and family come to his island house to celebrate his birthday. Midway through the visit, an announcement is issued from the TV—war has broken out, and nuclear annhiliation is most likely imminent. In the midst of everyone freaking out, Alexander tries to strike a bargain with God to prevent the destruction of the human race. Things get weirder from there.

Like all of Tarkovsky's work, questions of faith and existential concerns are central to The Sacrifice. Indeed, the movie was specifically made as a direct homage to Ingmar Bergman, whose movies trod similar ground. So direct an homage, in fact, that Tarkovsky made use of the Scandinavian director's preferred cinematographer, the famed Sven Nykvist, as well as Bergman's favorite filming location in Sweden and one of his regular leading men, Erland Josephson, to play Alexander.

Many people see the themes of death and apocalypse in the film as an outgrowth of Tarkovsky's own imminent demise, but in fact he had not been diagnosed with the cancer that killed him until after filming was completed. The film is also noted for a famous ending sequence that features the entire set being burned down. Unfortunately, the scene was being shot from a single angle in one long take, and the camera jammed. The production had to request money from the producers to do it all over again (this time with two cameras, though footage from only one was used).

This has no connection with the video game Sacrifice.