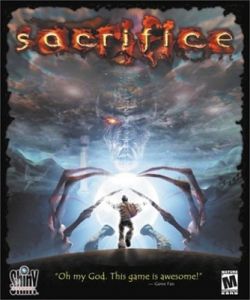 "In the realm that was my home, I had devoted my life to study of the arcane. No pursuit was too perilous, no sacrifice too great, until... Well... Under the many heavens, and in the many worlds, there are darker things than Men may dream of..."
Advertisement:

Sacrifice is a Real-Time Strategy game for PC, developed by Shiny Entertainment and first released in 2000.

The story of the game is about a wizard named Eldred (or whatever the player chooses to name him), assisted with his familiar Zyzyx, who meets a wise man named Mithras in the aftermath of a great war that has all but destroyed the world. Through a series of flashbacks narrated by Eldred, we learn the story of how he served the five Gods in the game: Persephone, James, Stratos, Pyro or Charnel, and how the intervention of his arch-nemesis, Omnicidal Maniac Marduk, led to the world's present state.

In each battle, the player gathers souls to summon creatures, and then duke it out with other wizards, also supplemented with various spells. Their goal, based on the name, is to find an enemy altar, desecrate it by performing a sacrificial ritual on that altar, and then kill the enemy wizard one last time to banish him.

Where many RTS games give the player a high-level isometric view of the battlefield, and may be vague about where the player character is in all this, the player's wizard avatar is specifically located and is viewed and controlled in the manner of a Third-Person Shooter. The main battlefield view is locked to the wizard's location and the wizard has limited ability to affect things outside their immediate vicinity.

At the beginning of each mission you are told to pick one of the five gods as your patron for that mission, and they will bless you with rewards. The game has a total of five different endings and 45 different levels for each god, inviting a lot of multiple playthroughs. Even still, each god will bless you with a new spell at the end of each one of their missions, with said spells being either Boring, but Practical (healing, energy blasts, elemental spells) to insane feats of magical power (such as summoning entire whirlwinds and creating active volcanoes.)

The game is available through Steam and GOG.com.