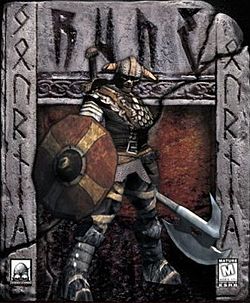 Rune is a third-person Hack and Slash game developed by Human Head Studios and published by Gathering of Developers, released in 2000 for Windows and Macintosh. The game uses a modified version of the Unreal Engine to utilize third-person melee combat instead of first-person gunfights.
Advertisement:

It is based on Norse Mythology, and follows the story of Ragnar after his initiation into Odinsblade when an allied village gets attacked. When sailing out to the village, he is attacked by Conrack who betrays his fellow Vikings and sides with Loki in his conquest for power, with his boat being destroyed by the power of the mad trickster god. Ragnar is called by Odin, who saves him from his untimely demise, and swims into an undersea cavern. Ragnar must fight his way through the legions of monsters, dwarves, vikings, and the undead that awaits him if he wishes to exact his vengeance against Conrack.

A standalone expansion pack, Rune: Halls of Valhalla, was released in 2001 that features new multi-player modes, new characters, and new maps. The game was later ported to the PlayStation 2, subtitled Viking Warlord, followed by a Linux port by Loki Software in the same year, as well as a series of pen and paper role-playing games by Atlas Games. Rune Gold, a compilation re-release of the original game and expansion pack, was also released at the time. Another re-release, Rune Classic, was released digitally via Steam in 2012 and on GOG.com in 2013 with the extra enemies from the PlayStation 2 version, streamlined levels, and the game's soundtrack as a bonus.

There was also a Tabletop RPG based on the video game, designed by Robin Laws and bearing the same title. It is notable for being one of the few truly competitive-by-design pen-and-paper RPGs.

A sequel titled Rune II, once again developed by Human Head Studios, was released on November 12, 2019 (nineteen years after the original). It was the last video game to be developed by Human Head Studios as an independent company; they closed their doors almost immediately after the game's release, and the entire team was relocated to Roundhouse Studios under ZeniMax Media.